This webinar is co-hosted by Black Protest Legal Support (BPLS). 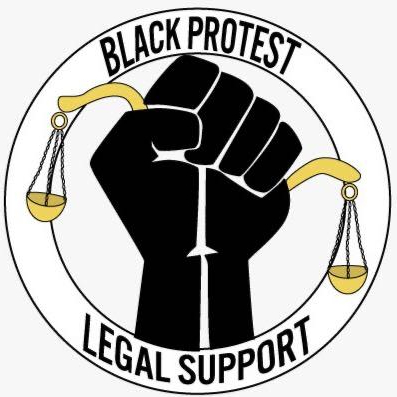 Winners of the Legal 500 Crime Set of the Year, Garden Court Chambers is one of the leading criminal defence barristers' chambers in the UK.

Following the Garden Court Chambers webinar series on protest law earlier this year, we will be focusing on the Black Lives Matter (BLM) protests, ignited following the murder of George Floyd on 25 May 2020. As we soon remember the one-year anniversary of his death, we remember all Black lives lost to police violence and how those protesting against this brutality can be protected from the State.

Black Protest Legal Support (BPLS), a group of Black and Brown lawyers set up to support BLM activists and racialised protesters, have reported dangerous and racially motivated policing tactics at these protests. These include accounts of police horses charging at protesters, kettling of crowds (during a pandemic), and routine violence against protesters and Legal Observers.

BPLS has seen the targeting, harassment and assault of Black, Brown and Racialised protesters and Legal Observers continue into this year, at Kill The Bill protests across the country. It is now more important than ever that we counter the chilling and racist effect of the current authoritarian crackdown on the right to protest.

This webinar will explore how to fight racist policing and protect protesters’ fundamental rights. Presented and organised by Fatima Jichi and Zehrah Hasan of Garden Court Chambers, both founding members and Directors of Black Protest Legal Support.

Zehrah Hasan, Barrister at Garden Court Chambers & Director of BPLS (Chair)
Zehrah practices in public, human rights, immigration and asylum law. She is a founding member and Director of Black Protest Legal Support (BPLS), which works to provide free legal assistance to Black Lives Matter and anti-racist protesters in the UK. Zehrah leads the organisation’s media and policy team and regularly speaks at events or publishes articles on protest issues. She gave oral evidence to the Joint Committee on Human Rights as an expert witness on the authoritarian Police, Crime, Sentencing and Courts Bill. Zehrah additionally works on strategic litigation for BPLS, including being involved in a current public law challenge against the Met with Liberty.

Zehrah also works extensively to resist immigration detention and deportations, as well as defending the right to protest in this context. She organised and Chaired our webinar on ‘protesting deportations’, and is currently instructed as Junior Counsel in Detention Action’s intervention in the landmark legal challenge brought by two children of the Jamaica 50. Zehrah has previously worked at a number of non-profit organisations, including Liberty, Southall Black Sisters and the London Black Women’s Project - in legal, policy and campaigning roles. As well as her involvement in BPLS, she is currently the Vice-Chair of the Human Rights Lawyers Association and External Coordinator for the trade union, Legal Sector Workers United.

Fatima Jichi, Barrister at Garden Court Chambers & Director of BPLS
Fatima became a tenant in October 2020 after the completion of her pupillage at Garden Court. Fatima has a broad public law and civil liberties practice, with a focus on state accountability and youth justice. Fatima is building a specialism in protest law and has represented protesters in civil and criminal cases, including cases involving court injunctions taken out by commercial organisations, as well as the police, and in committal proceedings.

Fatima also represents protesters in actions against the police arising from incidents of unlawful arrest, false imprisonment and assault during protests. Fatima is a founding member and Director of Black Protest Legal Support (BPLS), who support protesters and activists in the Black Lives Matter and anti-racist movements. Fatima leads the group’s civil liberties strategic litigation team. She is also a volunteer Legal Observer and regularly provides legal updates to volunteers as well as contributing to drafting bust cards explaining protesters’ rights. Fatima contributed to the Second Edition of The Protest Handbook.

Samir Pasha, Senior Caseworker, MTC Solicitors
Samir Pasha is a legal professional that works closely in partnership with lawyers specialising in Human Rights, Extradition and Criminal Law. He successfully qualified as a barrister (unregistered) and was a Middle Temple Scholar recipient. Samir was also a Human Rights Law Association bursary winner for his work in the West Bank, occupied Palestinian Territory, and holds a Masters from the University of Oxford specialising in Modern South Asia. He was awarded the Human Rights Law Association Award for his work in Palestine, researching and working on International Humanitarian Law matters. He is currently assisting on an international prosecution investigation under an eminent international prosecutor in the International Court of Justice and the International Criminal Court.

Samir regularly represent clients at police stations, and has represented asylum and refugee applicants against the Home Office. He specialises in extradition cases, and currently represents clients facing extradition for serious offences, including human trafficking. Samir was a legal observer at the BLM protests and represented a number of clients in the police station who were arrested during the protests. Samir published an article in June 2020 entitled 'Eroding the Right to Protest in the UK' about his experience.

Summer 2020 saw a call to action. The Black Lives Matter movement has demanded immediate and radical changes that are needed to address the violent and institutionalised racism embedded in the justice system and policing worldwide.

During September and October 2020, the Garden Court Chambers Criminal Defence Team held a series of webinars entitled ‘Drill Music, Gangs and Prosecutions – Challenging Racist Stereotypes in the Criminal Justice System'. The panels featured community activists and non-legal academics, contributing real insight and lived experience, inspiring us to bring about real change. The recordings have been watched by over 1500 people.

The fight for racial justice is rooted in collaborative action; we want to build on this, push the boundaries, and educate ourselves in how we can initiate tangible and equitable change in the criminal justice system.

Part 1 - How the US and UK state criminalise Rap and how to combat it
5pm-6:30pm, Wednesday 20 January 2021 & 5pm-6.30pm, Wednesday 12 May 2021
An international event where we were joined by US academics, experts, attorneys, and UK Counsel. Our panel considered, shared, and discussed tactics on how to combat the state’s use of rap lyrics in prosecuting serious crime, asking questions about both intention and subsequent consequences. Should the UK adopt the pre-trial proactive campaigning style sometimes used by defence attorneys in the US? How do we encourage more people who actually know about the reality of Rap to step up and become experts? What happens in capital cases and how do you deal with the pressure?

Part 2 - Gang Mythologies and Deportation
5pm-6.30pm, Wednesday 3 February 2021
Our panel of speakers explored how the Home Office uses evidence in failed prosecutions, and so called “intelligence” gathered through policing and monitoring of alleged gang activity, as a basis for deportation in what they call Operation Nexus. Our panel includes Greg Ó Ceallaigh of Garden Court Chambers, Dr Alpa Parmar, Associate Director of Border Criminologies at the University of Oxford, Maria Brul, Senior Advocacy Coordinator at Detention Action and Joan Martin, Family's for Justice Campaigner. The webinar was chaired by our Joint Head of Chambers Stephanie Harrison QC.

Part 3 - How to understand and confront racism in the justice system
5pm-6.30pm, Wednesday 3 March 2021
Dexter Dias QC, joined by Keir Monteith QC and Danielle Manson, of Garden Court Chambers presented an in-depth analysis of racism in the justice system. Dexter Dias QC broadcast a TEDx Talk in 2020 entitled 'Racism thrives on silence - speak up!', which received well over 1 million views, this webinar discussed further the issues he raises in this TEDx talk, namely it exposed toxic myths about race, in order to allow hope, change and justice to flourish. This webinar was chaired by Judy Khan QC of Garden Court Chambers.