We are delighted to announce that Stephen Lue, Tessa Buchanan and Audrey Cherryl Mogan of Garden Court Chambers have been shortlisted at the Legal Aid Lawyer of the Year Awards 2021.

The LALY Awards continue to play a vital role in recognising and celebrating outstanding lawyers who go the extra mile to achieve life-changing results for often marginalised and vulnerable clients.

The winners will be announced at the LALY21 ceremony to be broadcast live on 6 July. Registration is free, and open to all. Please join us to recognise the vital work of all the finalists. 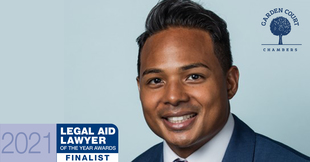 Stephen Lue is a specialist family law barrister. His practice covers a wide range of applications including public and private children law, financial remedies and domestic violence. He also acts in Court of Protection cases. He is praised for his skilful handling of complex child abduction cases. Stephen is ranked in Chambers & Partners and the Legal 500 for children law.

Stephen was recently successful in the Court of Appeal in Re B which meant that a child was returned to the care of his Grandmother after the ICO made was overturned on appeal. This case was widely reported in the legal press.

Referees describe Stephen's advocacy as "truly in a class of his own" with  an "ability to listen, empathise with people and take on complex matters to produce outstanding results".

Stephen is a passionate advocate for LGBT rights, Black equality, and supports a number of charities as a Trustee. Stephen provides mentoring to promote diversity and inclusion. He is currently a mentor for Urban Synergy, a charity that focuses on talented young people from BAME backgrounds who do not have access to the professions. Stephen has a reputation for offering mini-pupillages to individuals from non-traditional backgrounds who do not have links to the profession.

Stephen was a mentor with the Duke of Edinburgh Awards' LGBTQ Youth Programme. This involved attending sessions that are geared towards helping young people improve or learn a new skill, offering practical assistance with the programme and also introducing them to a diverse group of LGBTQ role models. He is also a Volunteer for Diversity Role models, which is a charity focused on celebrating the stories of LGBTQ+ professionals in schools. 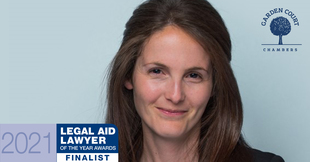 Tessa Buchanan is a well-respected barrister who undertakes work in the fields of housing, homelessness, community care, and Gypsy Roma Traveller (GRT) rights. Tessa is a co-author of ‘Housing Allocation and Homelessness’, a contributing author to several further textbooks, on the Equality and Human Rights Commission’s panel of preferred counsel, was vice-chair of the Housing Law Practitioners Association for four years, and is recommended in two different fields in Chambers and Partners.

Tessa is strongly committed to representing vulnerable clients such as those who lack capacity or those from a disadvantaged background. Tessa was instructed by Shelter in a series of successful legal challenges to 'No DSS' lettings bans which argued that such policies constitute indirect discrimination against women and disabled people, who are more likely to claim benefits. These cases attracted national press coverage and have contributed to vital sector-wide changes to lettings practices.  She also represented the appellant as junior counsel in a Court of Appeal case which helped define priority need for homeless applicants.

Tessa is committed to protecting the rights of GRT communities. In 2020, she was junior counsel in a landmark case involving a borough-wide injunction sought by the London Borough of Bromley. Tessa successfully opposed the grant of an injunction banning unauthorised encampments and then successfully resisted Bromley’s appeal to the Court of Appeal, where she secured detailed guidance limiting when such injunctions could be used. The Court emphasised the need for local authorities to respect GRT culture and traditions and to act proportionately.
More recently, Tessa was instructed as junior counsel in a test case in the High Court concerning injunctions against Persons Unknown. The case, which concerned 38 local authorities, led to an important judgment ruling that final injunctions granted against Persons Unknown do not bind newcomers.

She also undertakes community care work.  Her practice focuses on representing children and vulnerable adults who seek accommodation or assistance from local authorities or who are challenging age assessments.  As junior counsel, she represented the claimant in a challenge to a local authority’s practice of diverting homeless children away from the ‘Looked After Child’ protections and a test case on the reliability of dental age assessments. 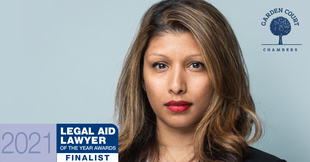 Audrey Cherryl Mogan is a criminal defence and human rights barrister with particular expertise representing vulnerable defendants, including children and young people, and defendants with significant mental health issues & drug addiction. Her background in European human rights law, trafficking and immigration enables her to advise on these matters within a criminal context. Audrey is regularly instructed in publicly funded legal aid work and most recently secured a win in the Court of Appeal, overturning a conviction in the case of Chipunza v R [2021] EWCA Crim 597, where the Court gave guidance on what factors a jury should consider when considering what constitutes a dwelling in burglary cases.

Audrey is a Griffins-Barrow Cadbury Trust Fellow, in joint partnership with Cambridge University, where she is undertaking research on trafficking and modern-day slavery.

Audrey is also a Director at Black Protest Legal Support (BPLS) which was set up during the Black Lives Matter protests in summer 2020. Audrey has worked assiduously to ensure BPLS is consistently providing the best possible support to racialised and marginalised communities. She has been at the forefront of their legal, policy and media work, whether that is writing articles for The Justice Gap, being quoted on BBC News, recently speaking on a panel about the Police, Crime, Sentencing & Courts Bill for the Article 11 Trust, or providing direct advice and assistance to protesters.

Supported by the Strategic Legal Fund and in collaboration with Commons Legal, Audrey successfully created and ran a campaign to challenge the nationality requirement in criminal courts. Her fearless approach and forensic legal strategy helped to ensure that the requirement for criminal defendants to disclose their nationality prior to their trials was scrapped.