We are delighted to announce that Garden Court's Sonali Naik QC has been named BSN Lawyer of the Year at the UK Diversity Legal Awards 2018. She became a QC in 2018 and is the newly appointed Chair of Liberty. 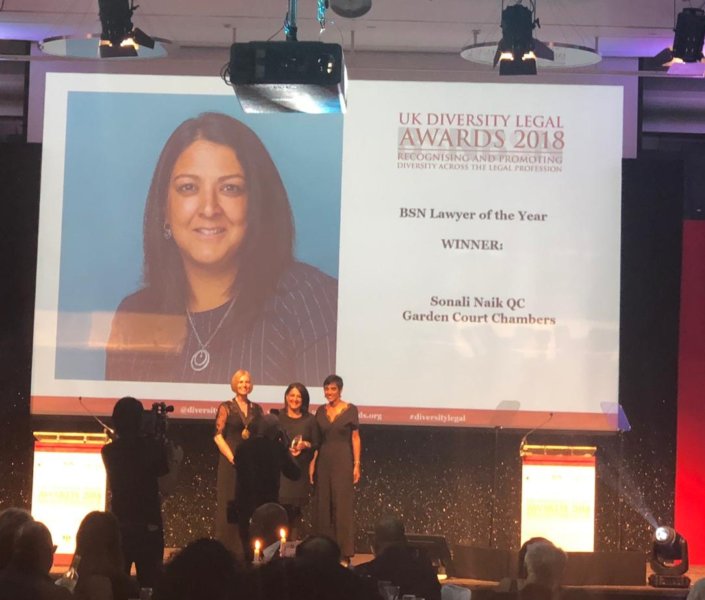 The Legal Diversity Awards are the only industry awards which focus solely on recognising, promoting and celebrating equality, diversity and inclusion across the legal profession.

A quote from one of Sonali's referees speaks volumes:

“there must be many refugees up and down the country who literally owe their lives to Sonali.

Her legal representation at appeals and judicial reviews sometimes meant the difference between deportation and freedom. She has turned around cases that others in her profession considered hopeless."

Sonali has worked for over 25 years as a barrister and is a true leader in her fields of specialism of public law, immigration and asylum. She has been a member of Garden Court Chambers since 1998.

Sonali's work has helped to shape and develop the law and includes work for asylum-seeking children, and victims of rape and torture. Sonali's exceptional record of bringing test litigation has continued unabated in 2018:

Sonali formerly worked in the NGO sector. She currently chairs Liberty, and is a trustee of Freedom from Torture, an Advisory Council member of JUSTICE, a trustee of the Immigrants’ Aid Trust (part of the Joint Council for the Welfare of Immigrants) and a Patron of the Clean Break theatre company working with women ex-offenders. She became a QC in 2018.  She is currently one of only 22 practicing BAME women silks (1).

(1) Counsel Magazine, 'Not (yet) glass shattering'