We are delighted to announce that Professor Leslie Thomas QC won the Outstanding Contribution to Diversity and Inclusion Award at Chambers UK Bar Awards 2020. 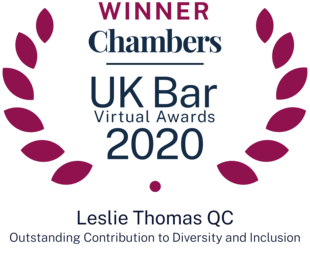 Professor Leslie Thomas QC has spent his entire career representing clients from diverse backgrounds, acting for vulnerable, marginalised and disadvantaged people, who seek justice and accountability from the state and others.

He has appeared in many landmark cases such as: representing bereaved families at the Grenfell Public Inquiry; high-profile death in custody cases representing the families of the deceased such as Kevin Clarke, Christopher Alder and Sean Rigg; representing the families of Stephen Port’s murder victims in their claim against the police for alleged failings during their investigations; the inquest into the death of Mark Duggan, who was shot dead by police sparking national riots; the inquiry into the death of Azelle Rodney, who was unlawfully killed by the police; the Hillsborough inquests for 11 families; and the inquest that followed the Birmingham Pub Bombing.

Leslie has advanced the careers of a generation of BAME lawyers and students through mentoring and training over many years. Leslie has emerged as one of the strongest legal voices in the country on the Black Lives Matter movement, contextualising it around its racialized policing dimensions and lack of diversity in the legal profession.

With the rhetorical statement, “So, you think the UK doesn’t have a policing problem . . .”, Leslie listed on Twitter 29 young black men who have died in police custody; “There are more”, he said, in an interview with The Times, adding that “the criminal justice system remains ‘institutionally racist’ with disparity in the treatment of black men at every stage”.

In June 2020, Leslie became the first Black Professor of Law at Gresham College. His inaugural lecture series is taking place in the current academic year, examining Death, the State and Human Rights. In October 2020, Prof Leslie Thomas QC became a Visiting Professor in Law at Goldsmiths

In an article for Counsel magazine in July 2020, Leslie called upon colleagues in the Bar to “talk about race”. “Forget the guilt and take action”, he urged. “Bias is implicit and often unconscious. It takes great courage to change the system. It benefits us all”. Prof Thomas wrote in the Counsel magazine in July 2020: “Racism and discriminatory behaviours pervade all levels of society and our legal system is not immune from the same. I have experienced it many times in my career.”

He followed up this article with a 10-step practical plan for improving diversity and inclusion at the Bar in the November issue of Counsel Magazine.

He has featured in numerous podcasts talking about Race and the Bar, including a recent episode 'Talking Law with Sally Penni', Founder of Women in Law UK and in a recent VENT documentary with young activist, Raye.

Leslie Thomas joined Garden Court Chambers in 1990 and is the former joint head of Garden Court Chambers. He was previously awarded the Legal Aid Barrister of the Year award in 2012, and again in 2016, for his work on the Hillsborough disaster. He also won the Lifetime Achievement Award at UK Diversity Legal Awards 2017.

Watch his acceptance speech below.