We are delighted to announce that Leslie Thomas QC won the Lifetime Achievement Award at the UK Diversity Legal Awards held on 28 November 2017. Matthew Ryder QC, Deputy Mayor of London, presented the award to Leslie Thomas. 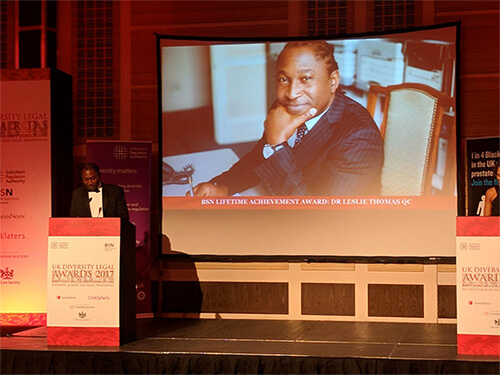 An initiative of the Black Solicitors Network, the awards are the only industry awards which focus solely on recognising, promoting and celebrating equality, diversity and inclusion across the legal profession.

Leslie Thomas QC has spent his entire career representing clients from diverse backgrounds, acting for vulnerable, marginalised and disadvantaged people, who seek justice and accountability from the state and others.

He has appeared in many landmark cases such as: representing the families of Stephen Port’s murder victims in their claim against the police for alleged failings during their investigations; the inquest into the death of Mark Duggan, who was shot dead by police sparking national riots; the inquiry into the death of Azelle Rodney, who was unlawfully killed by the police; the Hillsborough inquests for 11 families; and the case of Christi and Bobby Shepherd, who died on a Thomas Cook holiday.

Leslie has advanced the careers of a generation of BAME lawyers and students through mentoring and training over many years. Leslie is a member of the Inner Temple Outreach Committee, which targets state schools that have diverse student populations, and he is a member of the Inner Temple Diversity Committee, which aims to make the Inn more inclusive. Leslie is Deputy Master for diversity and inclusion.

“I was first introduced to Leslie Thomas in 1992 when he started to specialise in litigating against the police, the state and others. He quickly started to break records and rewrite legal history in terms of the damages he won for clients. In fact he was so successful, the Court of Appeal had to put a special structure in place to put a cap on the amount of damages he was achieving.”

“He went on to represent families in some of the most important cases that have come before us in the history of the legal profession. This is a lawyer, who very unusually manages to do something that most lawyers can’t do. He is an intellectual lawyer of great capability. He is a fantastic cross-examiner and jury advocate, but he is also someone who can understand and properly represent the voice of the communities he fights for. He is one of the finest barristers I know, litigating in the field of human rights.”

“It is a huge honour to receive the Lifetime Achievement Award. My achievements would not have been possible without the love and support of my family. I would also like to pay tribute to my barrister colleagues, my clerks and all the support staff at Garden Court who have contributed to my success over the last 30 years. Unlike many other chambers, what sets us apart is our shared values and ethos. I am immensely proud to work for a chambers founded on a commitment to equality, social justice and human rights, embodied in our motto, ‘Do right, fear no-one’.”