We are delighted to announce that Henry Blaxland QC of Garden Court Chambers has been awarded Crime Silk of the Year by the Legal 500 Awards 2019. 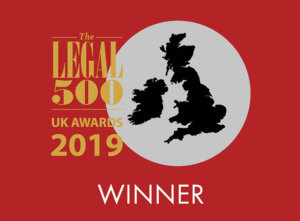 “Over many months of thorough research, we have conducted 70,000 interviews with in-house counsel, law firms and sets in the UK to pin-point the most capable, expert practitioners and firms operating at the top of their game.”

Henry is recognised as one of the leading criminal defence advocates in the UK. He was called to the Bar in 1978 and took silk in 2002. Henry is ranked as a Star Individual in Chambers & Partners and was previously shortlisted for Crime Silk of the Year at the Chambers Bar Awards 2017.

He specialises in serious crime, fraud, terrorism and criminal appeals. Henry has been instructed in many high profile trials over a 38-year career. In 2018, Henry represented former DJ and music producer, Jonathan King for alleged sex offences. Surrey Police apologised to Mr King and the trial collapsed after defence submissions revealed systemic disclosure failings in the case.

In 2016, Henry secured the acquittal of former broker Darrell Read, charged with conspiracy to defraud arising from allegations of fixing Libor rates. Over the course of his career, his notable cases have included: the case of John Downey, a successful abuse of process submission for a man accused of planting the IRA Hyde Park bomb: the celebrated miscarriage of justice appeals of Derek Bentley; the Bridgewater Four; the 7/7 London Underground bombing, and the Pakistani cricket match-fixing case.

Henry is described by the Legal 500 as:

"Quite simply, one of the best in the business."