We are honoured to have won the Human Rights and Public Law Set of the Year Award at last night’s Chambers Bar Awards ceremony. 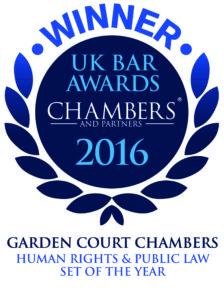 Over the last 12 months, Garden Court has undertaken pioneering human rights work, particularly in the areas of unlawful detention, asylum, deaths in custody, discrimination, actions against the police, homelessness, mental health and protest law. Team members also represented 77 of the families of those who died in the Hillsborough Disaster.

Our recent civil liberties and public law cases have overturned long-standing injustices in landmark decisions of national importance. Over the last year, our barristers have persuaded the highest courts to uphold crucial legal safeguards for some of the most vulnerable and marginalised sections of society. As one of the largest providers of publically funded legal advice in the country, we remain strongly committed to access to justice for all.

We would like to thank Chambers and Partners for drawing attention to human rights and the work done by human rights lawyers at a time when access to justice is becoming increasingly difficult. The cuts to legal aid and the government’s commitment to scrapping the Human Rights Act pose a serious threat to the preservation of justice and the protection of human rights.

The awards are based on research undertaken by Chambers and Partners for the 2017 edition of the Chambers UK Bar Guide, which will be published on 1 November.

Visit our Public Law and Civil Liberties pages for more information about the teams.