Garden Court Chambers is delighted to have been awarded the ECPAT Children's Champion Award 2019.

On Wednesday 16 October, ECPAT UK launched their new 'Stable Futures' campaign, which calls on the UK Government to give all trafficked children a stable future. Garden Court barristers, Gráinne Mellon, Shu Shin Luh, Michelle Brewer and Gemma Loughran, attended the event in Parliament and collected the Children's Champion Award on behalf of Chambers. 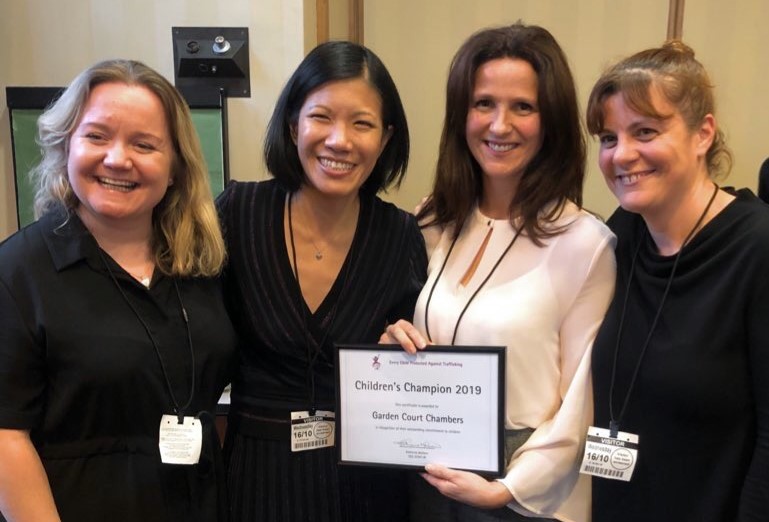 The ECPAT UK Children’s Champion Award is an annual award presented to an individual or organisation who has shown outstanding commitment to child vicitims of trafficking.

'For more than a decade Garden Court Chambers have sought to clarify, interpret and apply the legal principles which would lead to greater protection for victims of human trafficking.'

Garden Court's notable work in this area include acting in the case of ZS, a particularly vulnerable unaccompanied child from Afghanistan (now aged 15) - challenging the Secretary of State for the Home Department for failing in her duties under the ‘Dubs Amendment’, conducting legal advisory work on the Modern Slavery Bill for NGOs and for the Equality and Human Rights Commission, and giving evidence at All-Party Parliamentary Groups on human rights, trafficking and children’s rights.

"As well as advocating for trafficked children by shaping the law, Garden Court are outstanding advocates for individual children. Sometimes the cases they take on don’t receive attention or accolades, but they result in life-changing outcomes for child victims who can then begin to recover from their experiences.

With such a team of top barristers consistently fighting for child victims' rights and entitlements, we are confident that the current system for trafficked children and young people will continue to improve.

Congratulations to the team at Garden Court for a well-deserved award."

"We are hugely grateful and honoured to receive the ECPAT Children's Champion Award. ECPAT has worked tirelessly to protect children from trafficking and transnational exploitation so that children can uphold their rights and live a life free from abuse. We have worked closely with ECPAT for many years and we look forward to continuing our partnership with them into the future."