Jimmy McCafferty, an 11-year-old child who has an autistic spectrum disorder, has won £22,000 in damages and legal costs at Bow County Court against shopkeeper Dudu Miah. Jimmy was represented by David Renton of Garden Court’s Employment and Discrimination Team and Rheian Davies of DH Law Ltd.

Mr Miah had refused to allow Jimmy to top up his oyster card and had shouted at him and his mother as he threw them out of the shop. Mr Miah claimed that his shop had a ‘no dogs’ policy and would not make an allowance for Jimmy, who had an assistance dog with him.

Jimmy uses ‘Kizzy’, his trained assist dog, to maintain his safety whilst he is out and about. Part of Jimmy’s condition means that he is sensitive to noise. Occasionally, he bolts, putting him in particular danger when he is near busy roads. Jimmy is tied to Kizzy via a special harness and if he starts to run, the dog sits down hard and stops him running away.

Handing down his judgment, District Judge Vokes said that this was a “serious act of discrimination”, reflected in the damages awarded to the claimant. The judge said that Mr Miah “geared himself towards helping the able bodied only” and had a “discriminatory frame of mind.” 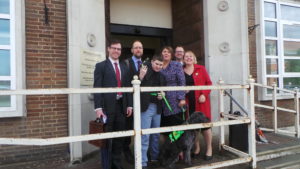 Jimmy McCafferty with Kizzy, his mum and his legal team outside court.[/caption]

“I brought this case to make sure that disabled children and adults who need assistance dogs can go about ordinary daily tasks, without fear of discrimination and harassment.  As well as throwing us out of his shop Mr Miah, who owns the shop, tried to stop us using a neighbouring shop as well.  He went out of his way to make my child and I uncomfortable.  It was all very distressing.”

The solicitor in the case, Rheian Davies of DH Law Ltd, has said:

“The Equality Act provides for disabled children and adults who need the services of an assistance dog.  Shop owners such as Mr Miah who have a ‘No dogs’ policy have to relax that policy in cases such as this, in order to meet the legal requirement of making a ‘reasonable adjustment’.  This is well known in the cases of ‘guide dogs’ for blind people but less so for the myriad of dogs that help people with all kinds of disabilities. None the less, Jimmy is a disabled child and to refuse to serve him because he has an assistance dog is unlawful discrimination. ”

Katy McCafferty is available for further interview in person, with Jimmy, in East London until Saturday 1st October 2016.  After that she is available by phone.