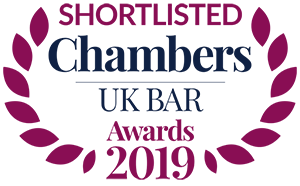 Winners of the awards will be announced at a ceremony on 31 October 2019 at the Hilton on Park Lane. Full details of the shortlist can be found here.

Judy is Joint Head of Garden Court Chambers. She was called to the Bar in 1989 and took silk in 2010. Judy’s practice crosses a spectrum of serious crime. She is predominantly briefed in murder cases, often involving gang-related killings committed by young defendants. Over the last year she has defended in several high profile murder cases – almost all of them have been multi-defendant cases at the Central Criminal Court. She also specialises in cases involving serious sexual allegations.

Judy also spent two years representing a number of families at the landmark Hillsborough Inquests that concluded 96 people had been unlawfully killed. Judy led a team of barristers at the inquests who dealt with the medical and pathology evidence.

Chambers & Partners describe Judy as "an excellent and impressive advocate who works tirelessly on a case. She is a ferocious advocate, who is totally dedicated to clients.”

Stephanie was called to the Bar in 1991 and took silk in 2013. She is a leading public law and civil liberties practitioner with over twenty years' experience representing claimants in complex and pioneering domestic and international challenges in areas affecting fundamental rights and freedoms. She is head of the Garden Court Public Law team. Stephanie's cases include those arising from unlawful detention, national security, official misconduct, abuse of power, child sexual exploitation, equality and discrimination, minority rights and civil rights protest and injunctions.

Stephanie is regularly involved in test case litigation and has been instrumental in winning some of the most important cases within her areas of specialism in recent times. Over the last year she has won a number of landmark cases including: a High Court decision declaring the Home Secretary’s investigation into immigration detention abuse at Brook House as inadequate; a Court of Appeal win overturning draconian injunctions preventing protests against INEOS fracking activities; and winning a Supreme Court case reasserting the role of medical experts in asylum claims by torture survivors.

Stephanie has been appointed as preferred legal counsel (level A) to the Equality and Human Rights Commission.

The appellant was represented by Ronan Toal and Michelle Brewer. Stephanie Harrison QC, Ali Bandegani and Mark Symes for the interveners.